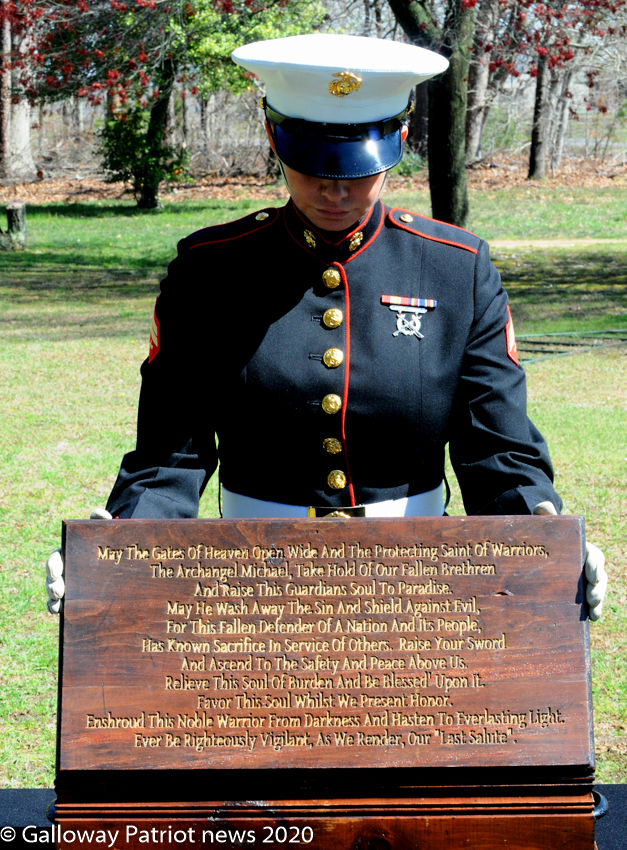 UPDATE!!! See the Prayer Box carried for 21 Miles on Memorial Day in a long hardcore road march in full gear.

We promise the families we serve that we will always honor and always remember their fallen hero. Last Salute’s Prayer Box is how we keep that promise.

An old church on the White Horse Pike served the community for almost 100 years.  It was the site of countless weddings, christenings, funerals and services.  when it was taken down years ago, we asked to have some of the wood salvaged from the inside.

From this special wood we constructed a memorial box to hold the prayer cards or photographs of every fallen hero we honor. At each funeral ceremony we read the prayer carved into the boxes top and then ask a family to place their loved ones photo inside.  All of these cards are kept in the memorial prayer box.  They travel to each funeral for which we conduct services and each time a new card is added.

Our prayer box is always with us and has been held and prayed over by countless clergy as well as dignitaries, but most notably, many Medal of Honor recipients.

It was with us at the Tomb of The Unknown Soldier at Arlington National Cemetery when we conducted a ceremony there.

It was flown by Black Hawk helicopter from Fort Dix to Vineland for the renaming of the middle school after the first Army Ranger to die in the Black Hawk down battle.

It was honored at the Battleship New Jersey.

The heroes inside were placed in an assault pack and carried across Parris Island to participate in the rifle range, the gas chamber, the obstacle course, the crucible and even worn during an exercise thrashing at the hands of a Marine Corps Drill Instructor.

It was placed in a Coast Guard MH-65 helicopter and flown over restricted air space in Washington DC to include the Pentagon, the Capitol, the White House but most importantly Arlington National Cemetery

The Last World War Two Medal of Honor recipient Hershel “Woody” Williams passed away in July of 2022. His family placed him inside Last Salute’s Prayer Box. Woody honored those in Prayer Box whenever he was able.

May the gates of heaven open wide and the protecting Saint of warriors, the archangel Michael, take hold of our fallen brethren and raise this guardian’s soul to paradise. May he wash away the sin and shield against evil, for this fallen defender of a nation and its people, has known sacrifice in service of others. Raise your sword and ascend to the safety and peace above us. Relieve this soul of burden and be blesséd upon it. Favor this soul whilst we present honor. Enshroud this noble warrior from darkness and hasten to everlasting light. Ever be righteously vigilant, as we render, our “Last Salute”